Oh where to being? With almost two and a half weeks of vacation, blogging about it to share pics seems like quite the task! But, I'll try not to drone on like I have in my other posts, but instead hit the highlights. A minor point: I tend to be rather private in certain ways, so don't expect names (I'll tend to stick to titles or some kind of nickname) or photos of the family (though I might show up in some from time to time.) I'll probably keep details on those bits light altogether, I'm not sure.

So where did we leave off from the travelogue post? It was 1:23pm Eastern European time when we discovered our luggage had been lost. We were in Latvia with the clothes on our back and whatever we had in our carry-ons. The Riga Airport is not as large as Amsterdam's but was a fair bit bigger than Dayton's airport. Decor was an interesting functional modernist style:

(Some photos will be blurry and lower-quality. These are generally ones taken with my phone) 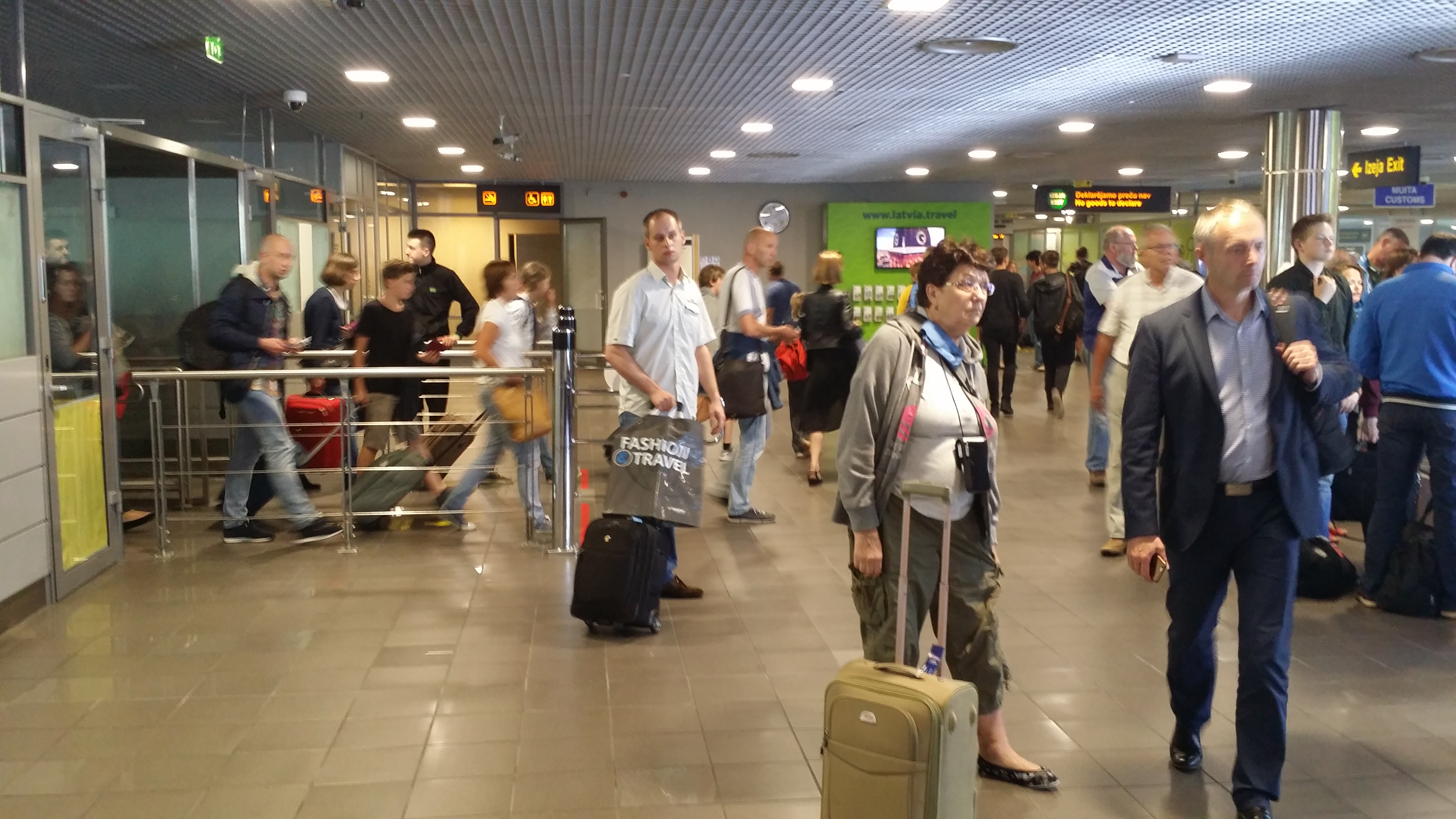 One of the more remarkable (though, on reflection, rather obvious) bit about the trip to Latvia was how most the folks general appearance felt almost familiar; there was a certain something that made it feel like they looked more like us than most people do. I felt like I fit right in with the complete strangers shuffling past us on the Air Baltic flight. Descending from the clouds to see the rich green-hued forests was an unforgettable, shivering moment; it felt like I'd come back home. 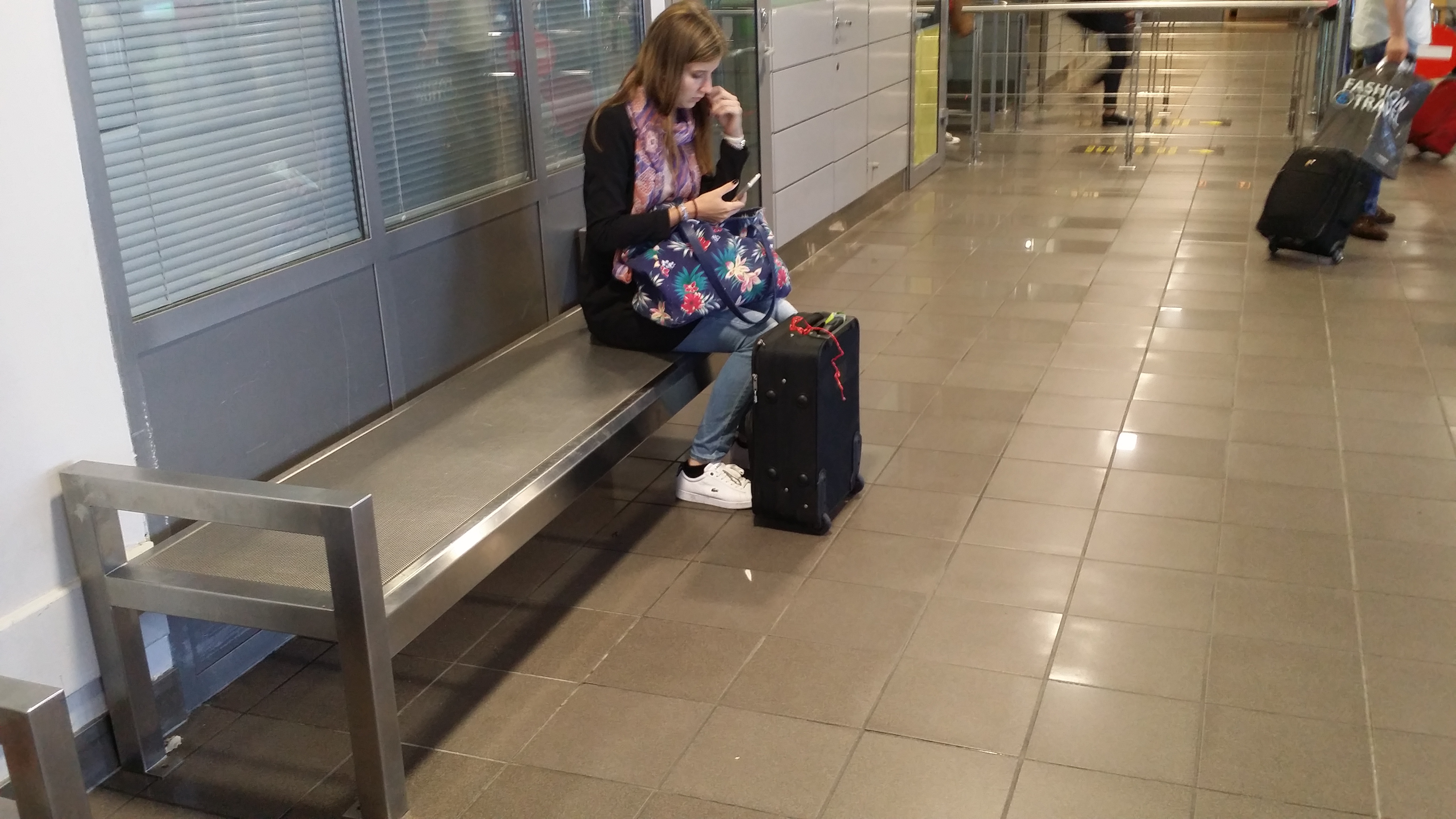 We met with the Priest my Dad had connected up with online. When he had started planning this trip, he drafted a letter (translated with the help of one of his more locally-adjacent cousins) and sent it out to various people who shared our last name. Those who responded found the details he'd provided a striking match and the first spark connecting back was made as they traded back a few photos we'd never seen before of our Grandparents. In the correspondences, they brought up a Priest who traveled to America from time to time that was the Godfather to one of their sons. It turned out that my Dad had met the Priest once before with his parent several years ago. And so, the priest (and our newfound cousin, the Godson) agreed to meet us at the airport and help translate for the first meeting with the long lost relatives.

The Priest and the Godson drive us to the first of three apartments we had arranged to live in on the trip. The section of Riga outskirts the airport is situated on has an almost stereotypical Dreary-Eastern-European feel to, heightened by the rainy overcast. 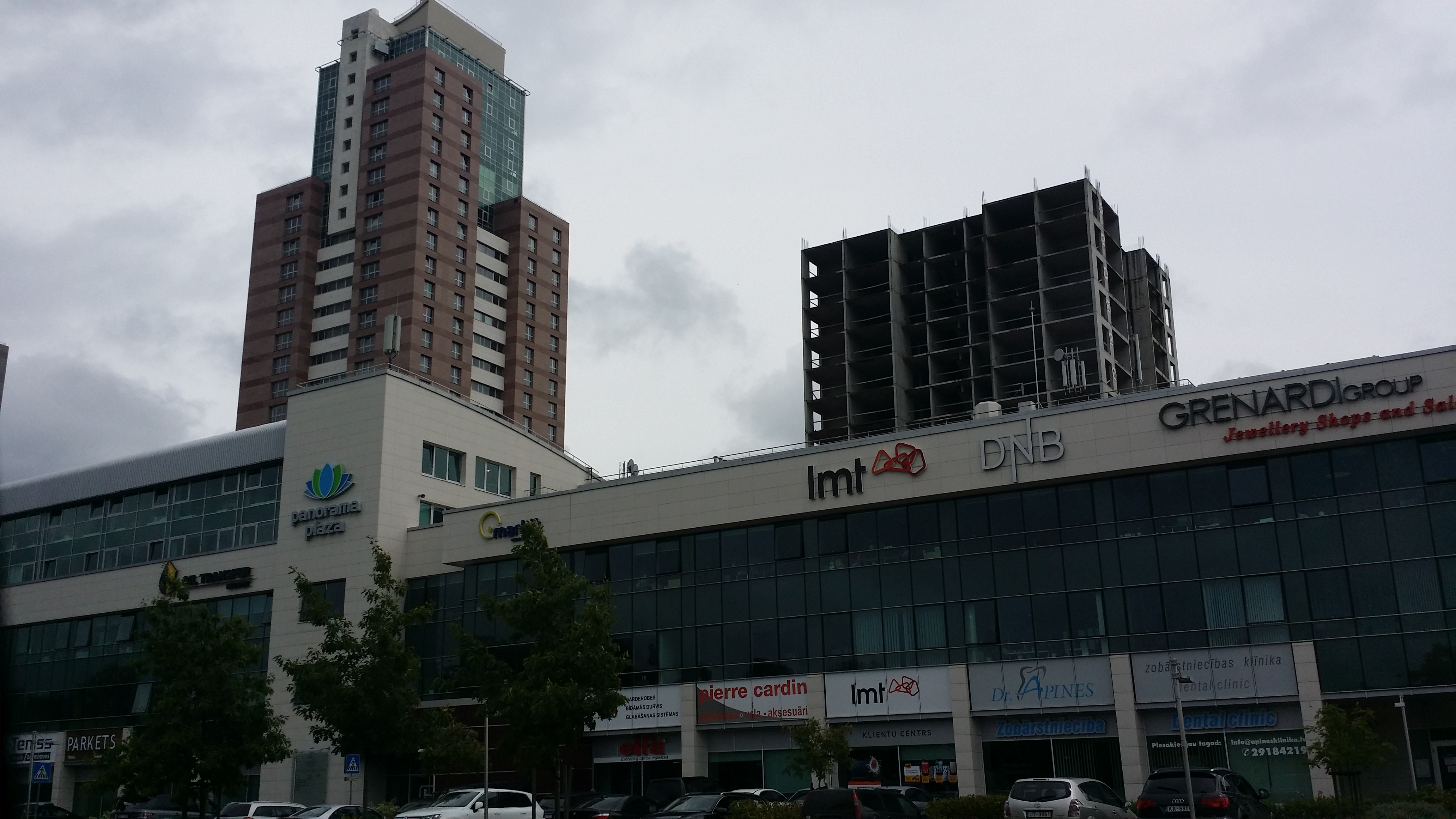 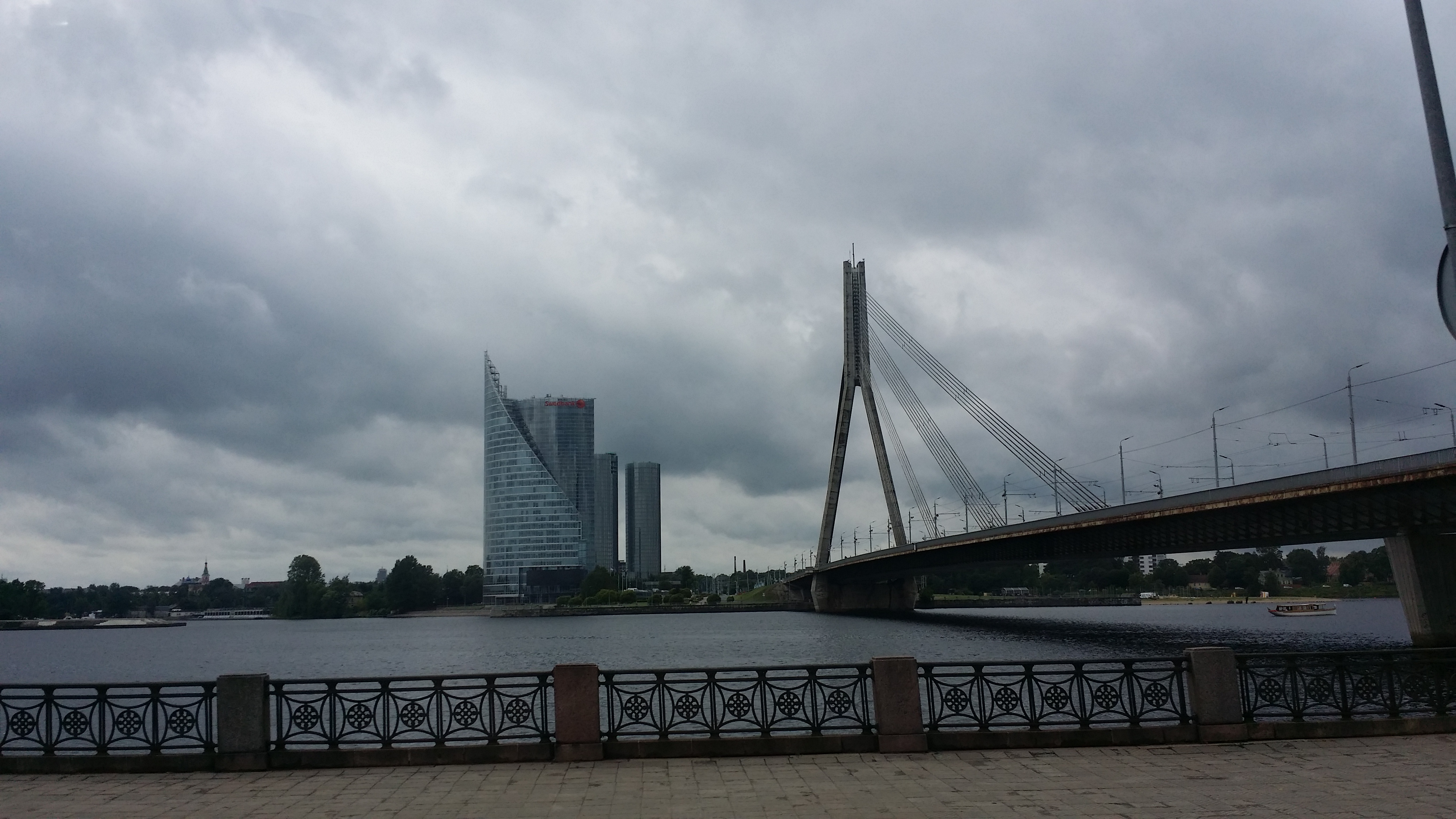 But, like the overcast, this feeling soon parted and gave way to the beautiful, modern European city that is much of Riga.

It was almost like a tease, showing us what our culture has established in our minds and then taking it away saying "Haha, nah just kidding; here's the real world!" 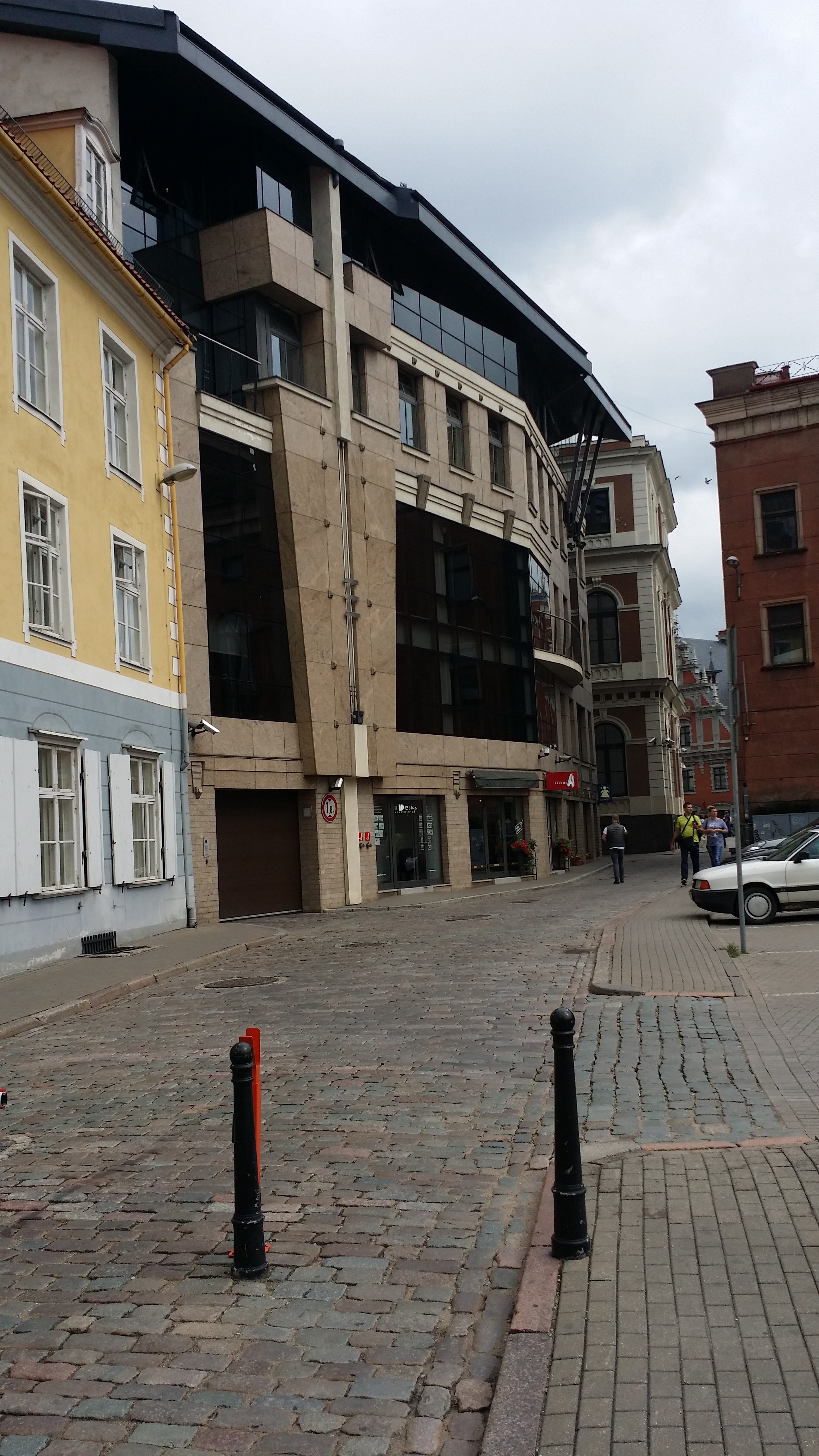 But, of course, as is true of the real world, Riga is a complicated layering of old and new, good and bad. Much of the most beautiful and picturesque parts are concentrated in the section called "Old Town". A sector in the heart of the city dotted with the government building and a vast array of more touristy areas (and beautiful architecture). But Old Town, like our culturally-ingrained expectations, isn't quite true reality. It's almost like a massive tourist theme park, in a way. It has all the elements of true reality of life in Lativa and certain aspects cranked up to 11 with a hearty concentration of more tourist-oriented faculties. That's not to say it's a bad thing, in fact it was a wonderful experience. But, we'll get into that more in another Blog post I'm sure.

We arrived in our apartment space, which was being utilized and sold out like hotel rooms, just on the outskirts of Old Town with all the best attractions and interesting locals within comfortable walking distance. The apartment space was a fantastic deal, much cheaper than nearby hotels or anything situated completely within Old Town. But, being old government housing from the 1940s it didn't exactly give the best first impression... 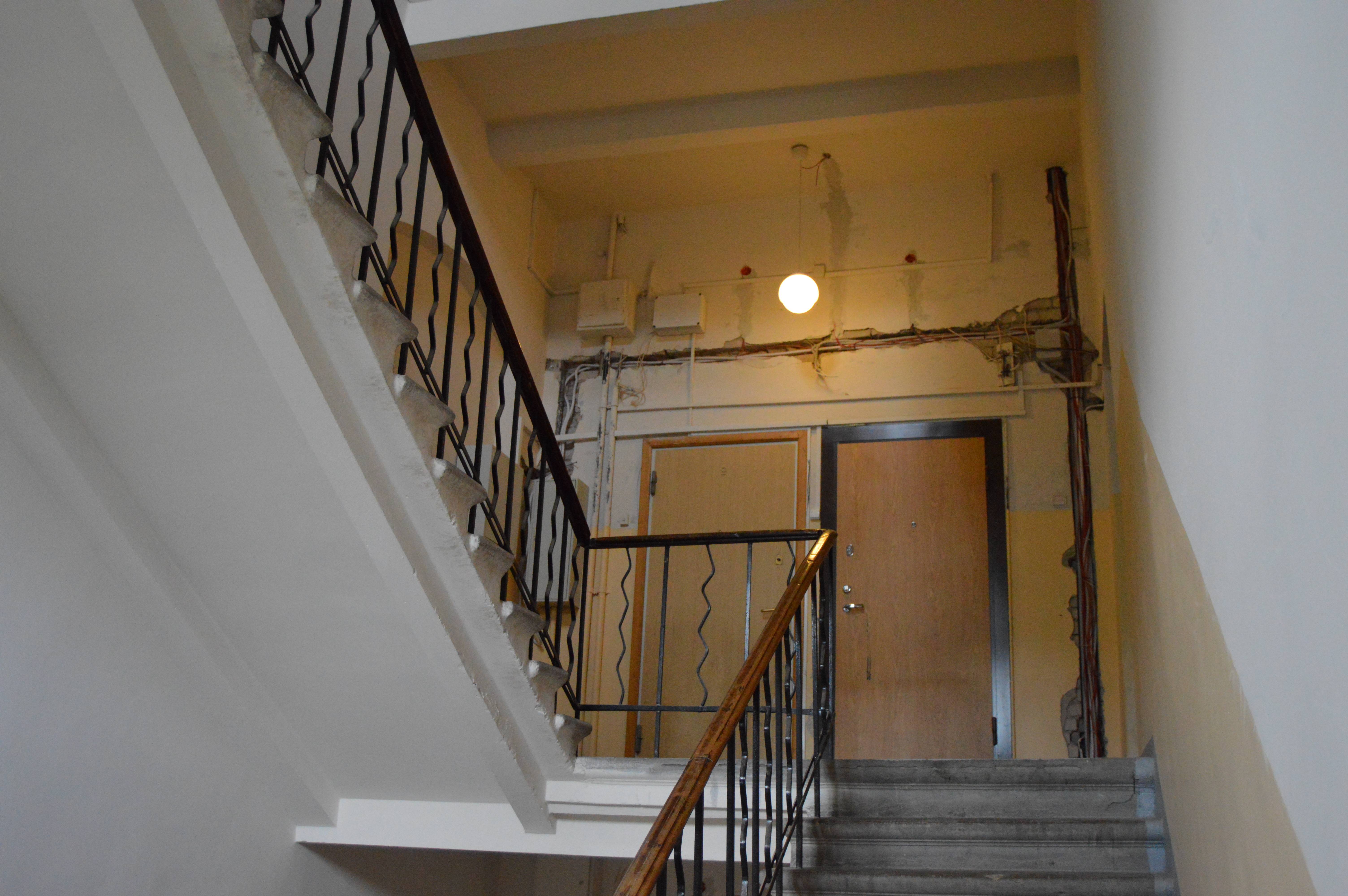 Did I mention it was a fantastic price?

Ok, so the inner stairwell and immediate surroundings were a bit run down, but the actual apartment wasn't that bad. It was no Hilton, to be sure, but comfortable enough (and a fantastic price!) 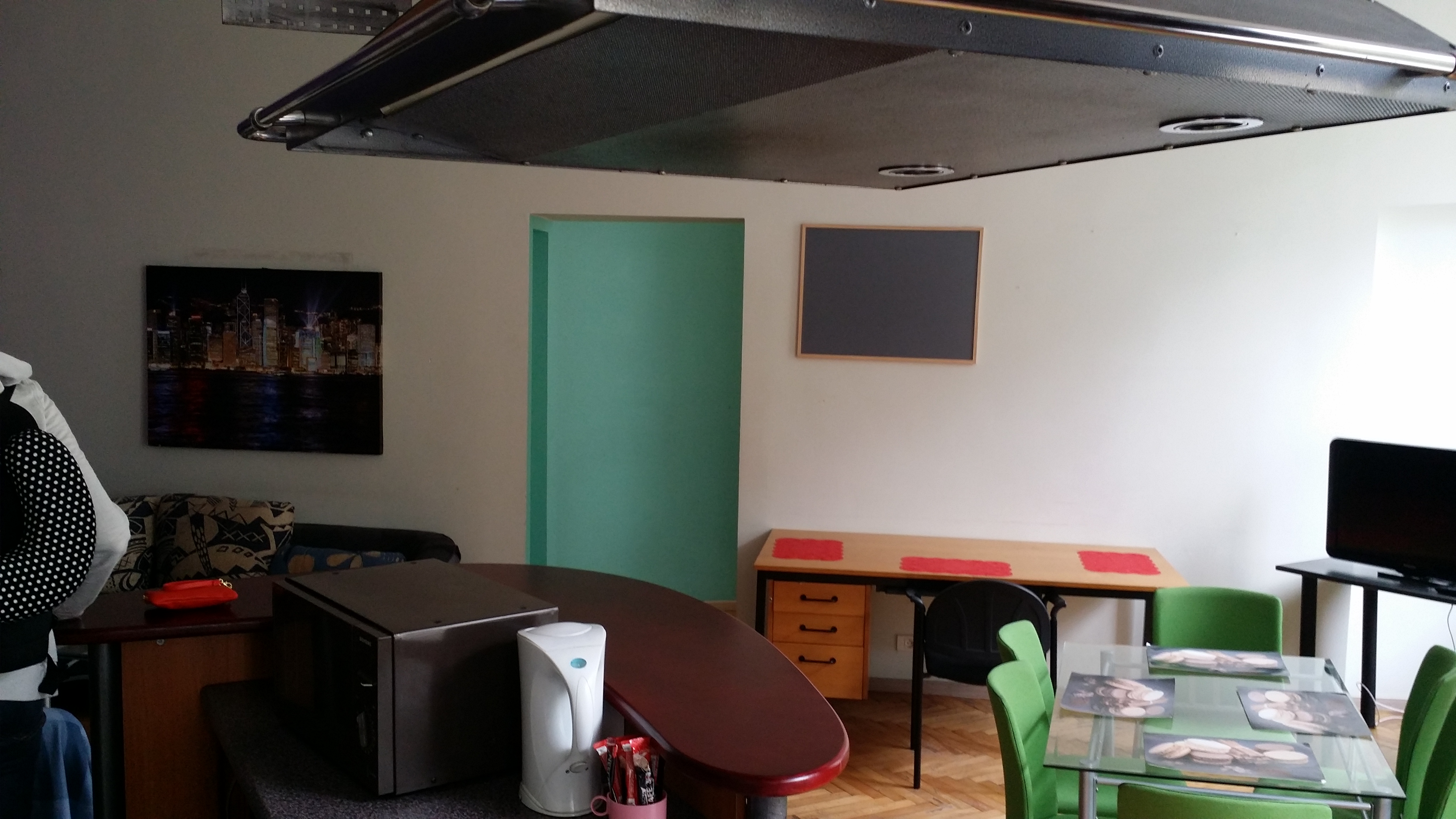 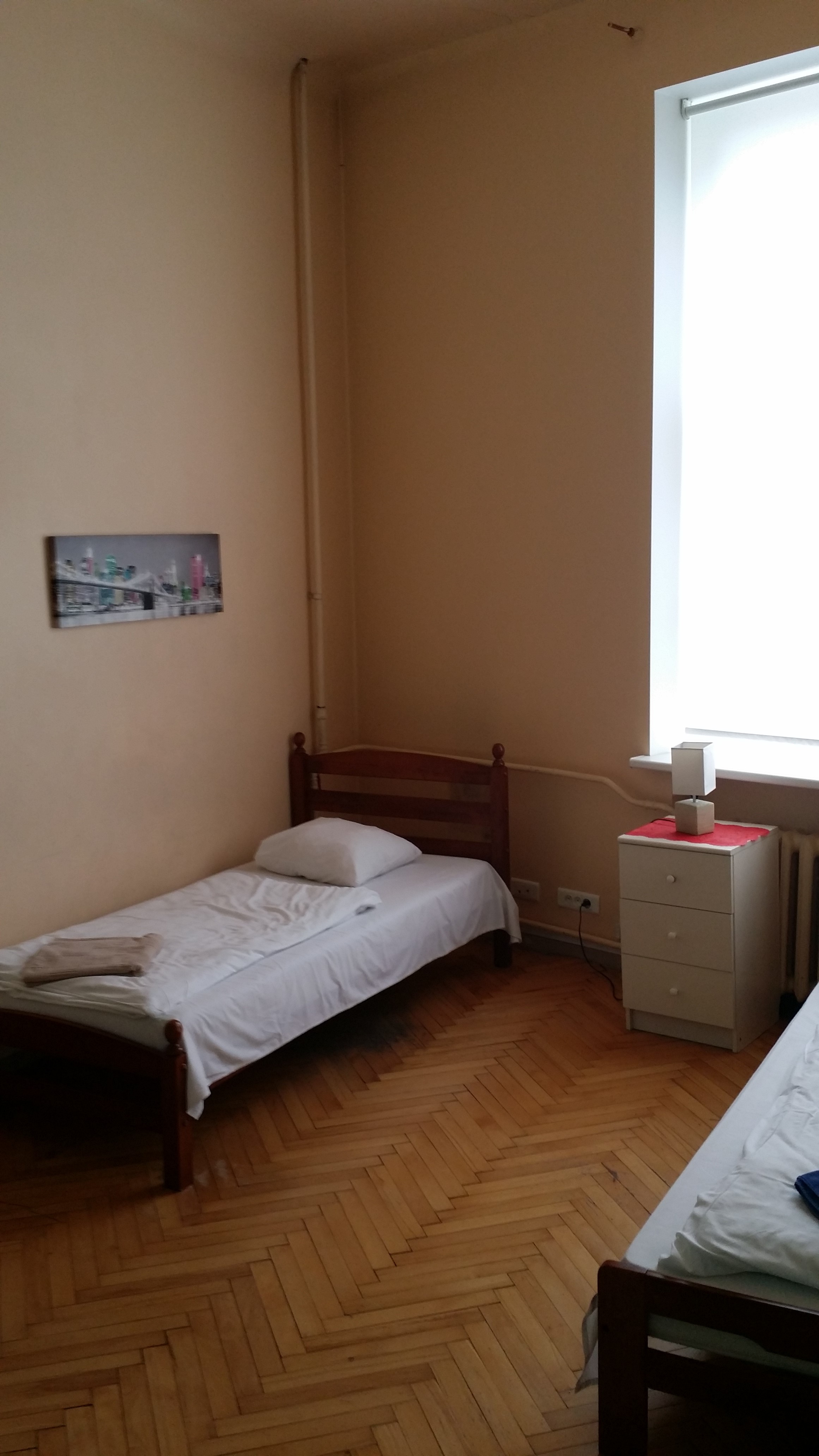 This was the bedroom I shared, one of 3. (The entrance to it is seen as the blue-green area in the first photo.)  Although the incredible snoring of my family members (including those in an adjoining room) eventually forced me to flee to couch in the living room. 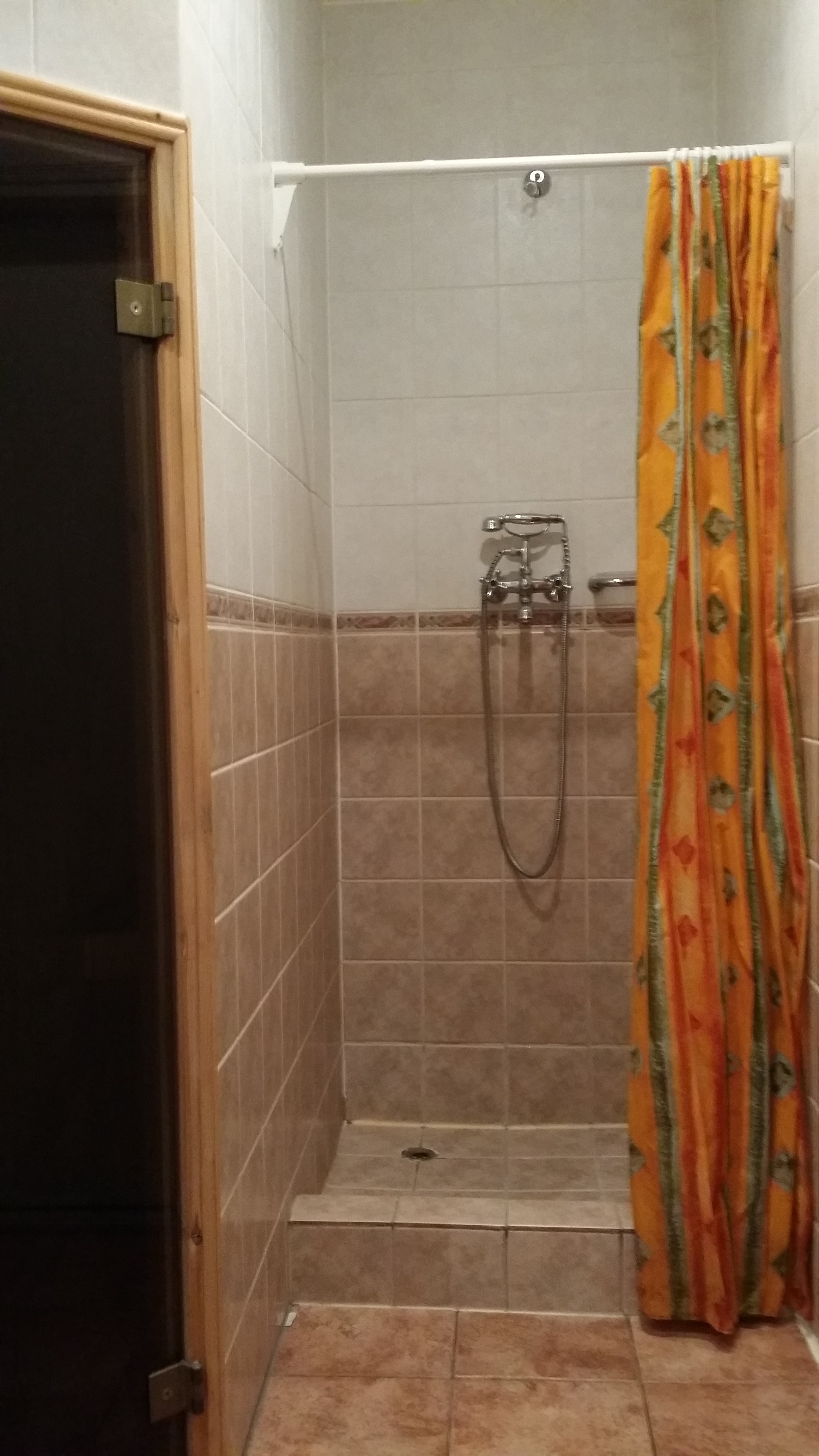 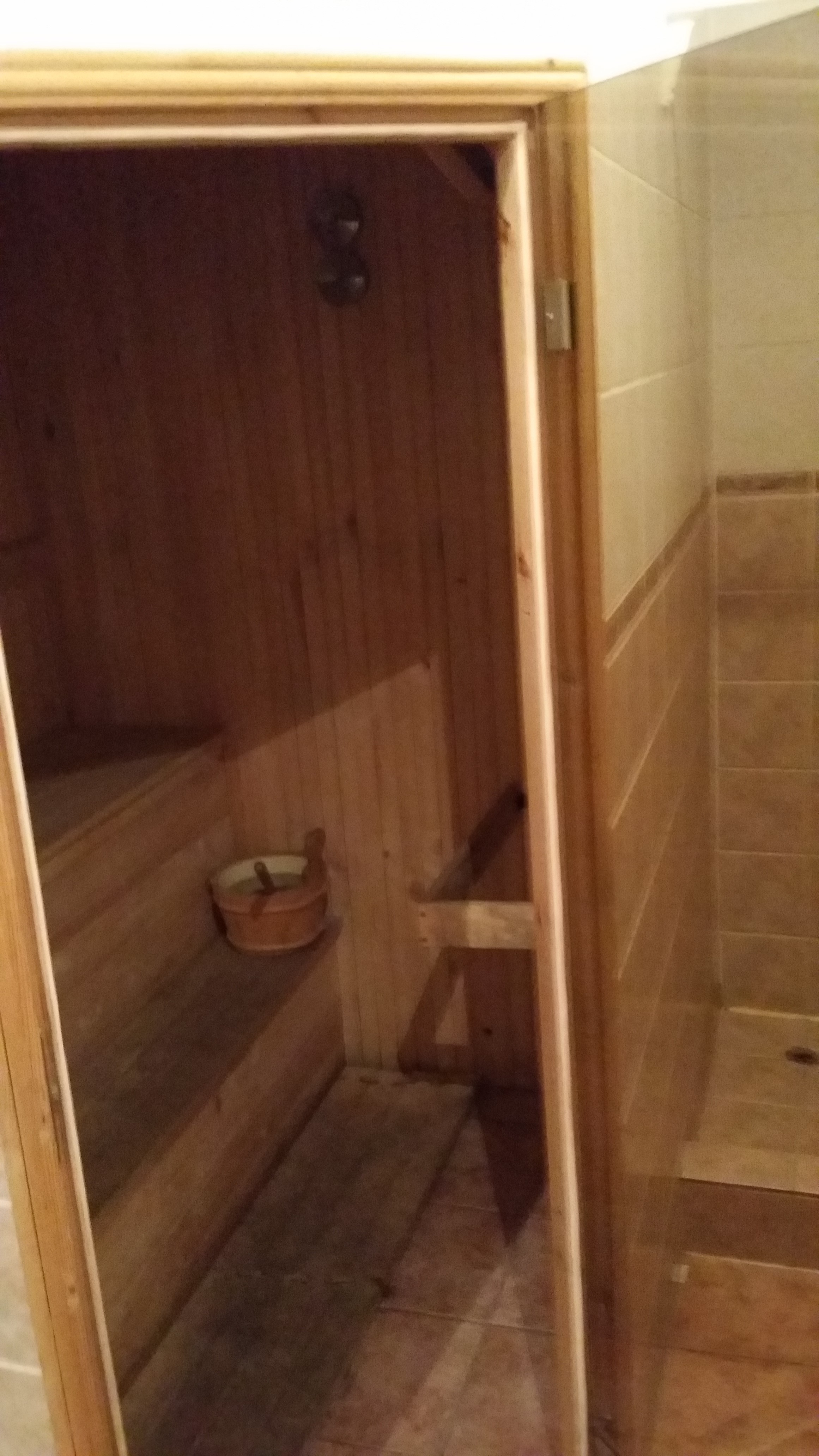 The bathroom shower was rather nice. Although the shower head eventually broke off and had to be replaced. And the neighbor below let us know his ceiling above his shower had started leaking the day before our last day there (thankfully, he was also checking out the next morning, before we would have to shower). It also had a neat little sauna and a dryer (but no washer, as we soon found to be a common theme in Europe, along with a lack of air conditioning.)

There was only about 2-3 hours to rest in the apartment, before the Priest was to come back and take us to the dinner with the first of our long-lost relatives. Lacking luggage, we had to stick to the clothes we wore on the plane (or in some cases, had stuffed in our carry ons). By luck, I had some underwear and t-shirts and clean jeans I had worn the day before the trip, so I wasn't completely stuck in the clothes we'd just spend 18 hours flying and shuffling about in. At least we each got to take a shower!

Dinnertime arrived and we traveled to the restaurant. It was a rather ritzy looking place. My dress was well out of place, even in the bathroom: 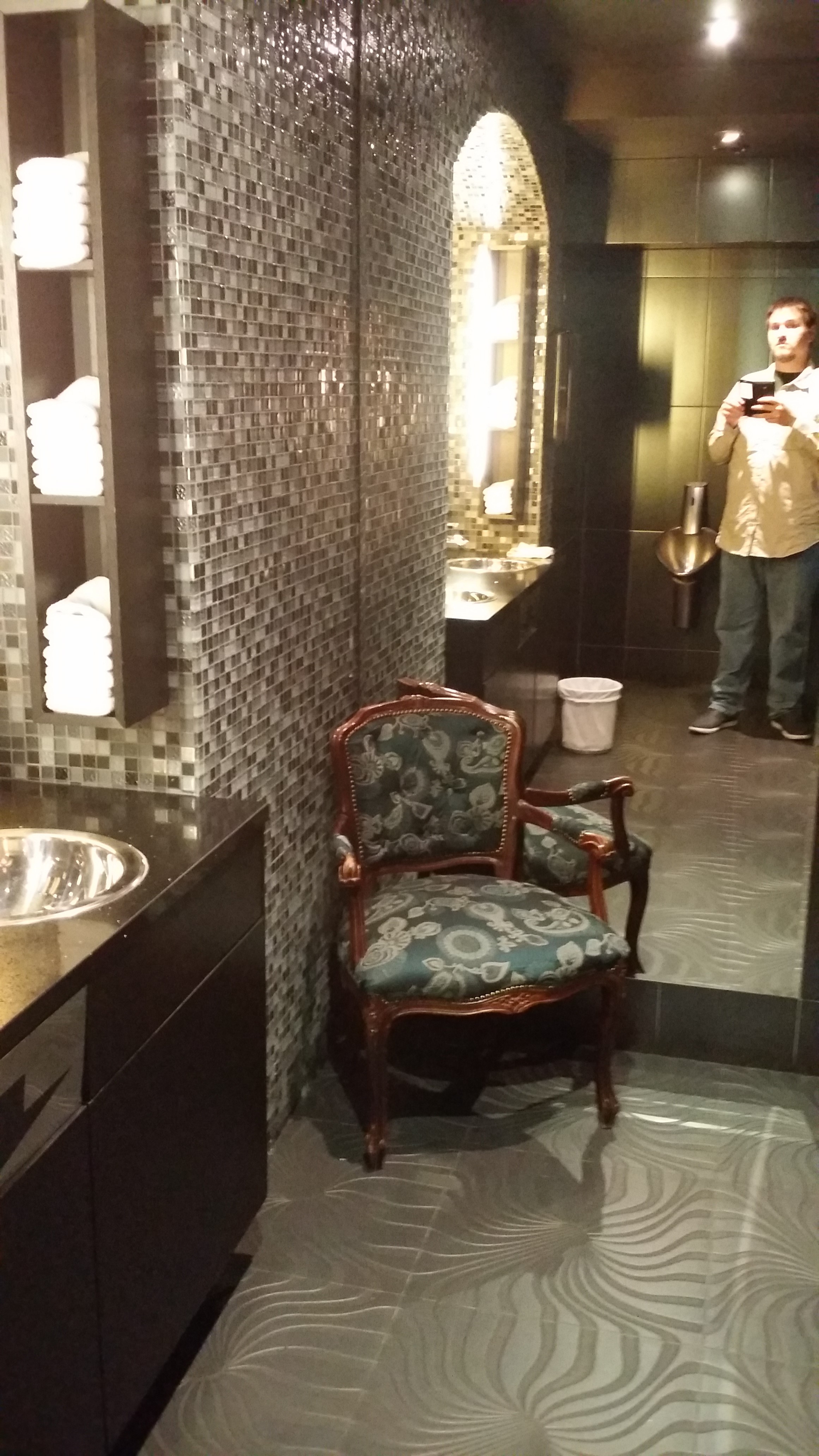 The restaurant had a formal dinner-party style to its meal, consisting of only two choices on the main course, after drinks and appetizers and bread. After the dinner was small dessert and then a drink. Unlike typical restaurant all but the choice of drink and main course were per-determined. Everything tasted wonderful and looked beautiful. There were toasts and short speeches, translated into English, Latvian, and Russian to fit for each of the languages spoken. Conversation was a bit awkward and slow-paced, but never-the-less it was nice to learn about them and what they do and see their reactions to our own info.

In particular, I learned I have a relation who works for a Russian games company! One curiosity occurred when informing them of our own professions. They each were polite and smiled in response to translated explanations of my older sibling and my work in different kinds of software. But, there was an electrified, and very positive response when they heard that my younger sibling was working as an assistant chef.

At the end, a sort of palette-cleanser drink was provided; a local specialty called Riga Black Balsam. I don't drink, so I didn't have any of it, but I'm told the flavor is herb-y and very bitter but not in a bad way. It also has 45% alcohol content. I decided the bitter bottle would make the perfect gift to brink back for my co-workers >X3c

Our parents had prepared some cookies as simple gifts to give the relatives and children (though it turned out they didn't bring their children). However, it turned out that the relatives had also brought gifts; rather more impressive calendars and trinkets. We saved face by saying the rest of the gifts we'd brought were in our luggage and only had the carry-on full of cookies that we were afraid might break if we checked them. Thank goodness the airlines had lost our luggage!

After the meal, we visited the Freedom Statue (a prominent landmark just down the street) to take some family photos and returned to the apartment. All told, from the moment we got up for our first flight, to the time we were back in the apartment, I had not slept at all. It had been over 24 hours before I finally fell asleep at the end of it. It was an amazing start to what would turn out to be an amazing vacation. One that I hope to continue to relay in blog posts and images again soon!